A Texas Jeep Organization since 1997!

Paul Soccio posted his unofficial Tigger Turkey Crawl at Gilmer’s BMRA on the LSJC forum for the Saturday after Thanksgiving and that it was going to be easy-ish to light medium trails to help his wife, Jenn, break in her CJ. Melinda and I decided to sign up for that and when we saw some others were arriving for some Friday runs and we had extra time off that we would go ahead and get there Thursday night and try to hang with that group a little Friday.

My 2000 TJ recently had a D44 with ARB lockers installed but I hadn’t really put it to the test yet so I thought even though the harder trails were not in my comfort zone we would give it a go. We got to park and ran a few medium type trails with Brian, Murphy and Dirty Old Man until about noon when we saw Al (Wushaw) pulling his big ole setup into the camp area. It didn’t take him long to get ready to ride so after a lunch break we all hit the trails with Al and Lloyd McPherson. Didn’t take long to get the old adrenalin going with Al in the lead. We had a great time and the weather was perfect. We rumbled up Shake, Rattle and Roll and I was having a little difficultly getting up the final ledge. Al was spotting me and got us to a point where he said bump it and I think I might have over bumped and we flew up in the air. At one point all the wheels were in the air and Lloyd was able to get this shot. It was all a blast and later we all hung out at the camp grounds and had some fantastic food and campfire talk (Thanks, Lou and Al). 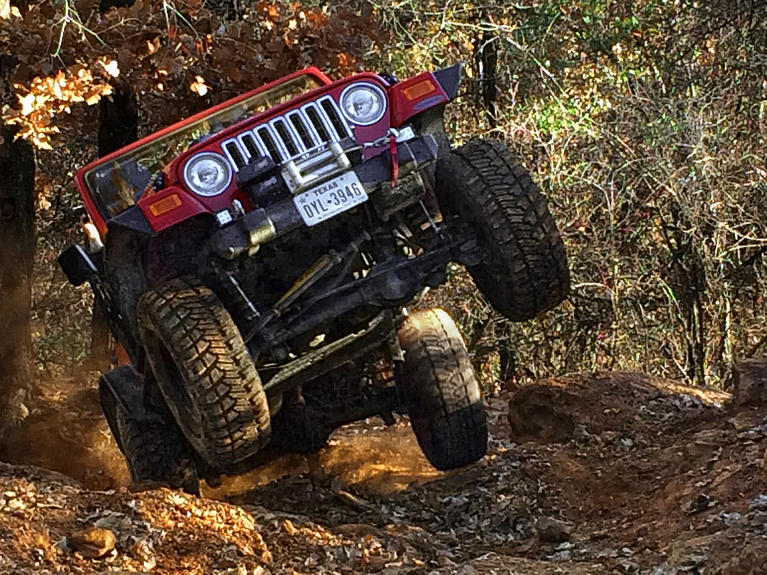